Samsung’s world premiere at 3nm! The voltage is only 0.23V | duzline.com

In recent years, TSMC has been riding its whip all the way in semiconductor technology. The spring breeze is proud, and only Samsung can catch up with it, but the quality of the latter’s handicrafts has been questioned.

At the IEEE ISSCC International Solid State Circuit Conference, Samsung (specifically Samsung Foundry) showed the chip made by the 3nm process for the first time, which is an SRAM memory chip with a capacity of 256Gb (32GB), which is also the tradition of the new process. The first step.

Samsung will apply GAAFET (circling gate field effect transistor) technology for the first time in the 3nm process, and once again achieve a breakthrough in transistor structure, which is another leap over the current FinFET stereo transistor.

GAAFET technology is divided into two types, one is conventional GAAFET, which uses nanowire as the fin of the transistor, and MBCFET (multi-bridge channel field effect transistor), which uses thicker and wider fins, called nanoosh. eet).

Samsung’s first 3nm SRAM chip uses MBCFET, with a capacity of 256Gb and an area of 56 square millimeters. Samsung is proudest of ultra-low power consumption. The write voltage only needs 0.23V, thanks to MBCFET’s various power-saving technologies.

According to Samsung, the 3GAE process can increase transistor density by up to 80%, performance by up to 30%, or power consumption by up to 50% compared with its 7LPP.

Perhaps this can allow Samsung to better control chip power consumption and heat, and avoid the so-called “overturning”.

Samsung 3nm is expected to be put into mass production next year, but no customers have been announced yet. 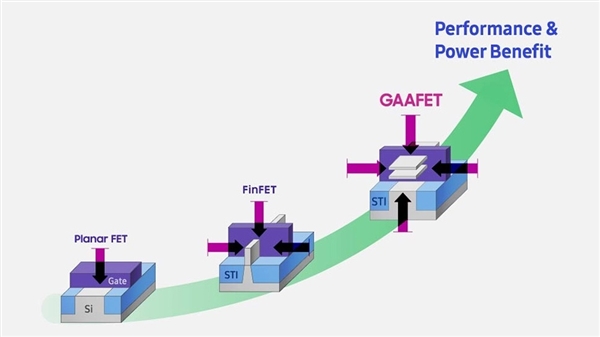 In terms of TSMC, 3nm continues to use FinFET technology, claiming to increase the density of 5nm transistors by 70%, performance can be improved by 11%, or power consumption can be reduced by 27%. It is expected to be put into trial production later this year and mass production next year, including customers except Apple, AMD, NVIDIA, Unicom. Hairco, Sellings, Broadcom, Qualcomm, etc., and even Intel are said to use it.